The temptation of adventure and what following through with it means for the characters is one of my favorite themes in romance. In fact, it resonates with me so much that for quite some time I used a symbol of the call as the banner for this very blog. 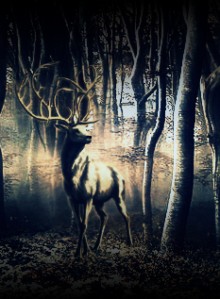 Regal and mysterious, the white hart beckons for the protagonist to follow him into the unknown.

The white hart, or stag, is commonly found in fairy tales and legends as a magical figure representing what hides just beyond the world you know, if you’re brave enough to heed the call. The story goes, King Arthur was on a hunt when he and his knights witnessed the majestic creature, and decided its presence signified the time for a quest had come. In the Lion, the Witch, and the Wardrobe, a white stag is said to have the power to grant wishes to whomever is able to catch him. More recently, it can be argued that Harry Potter’s introduction to Patronuses was a callback to the idea of the ethereal, otherworldly white deer.

Many thanks to the wonderful RioGirl for my awesome banner. You can see more of her work here: RioGirl on DeviantArt